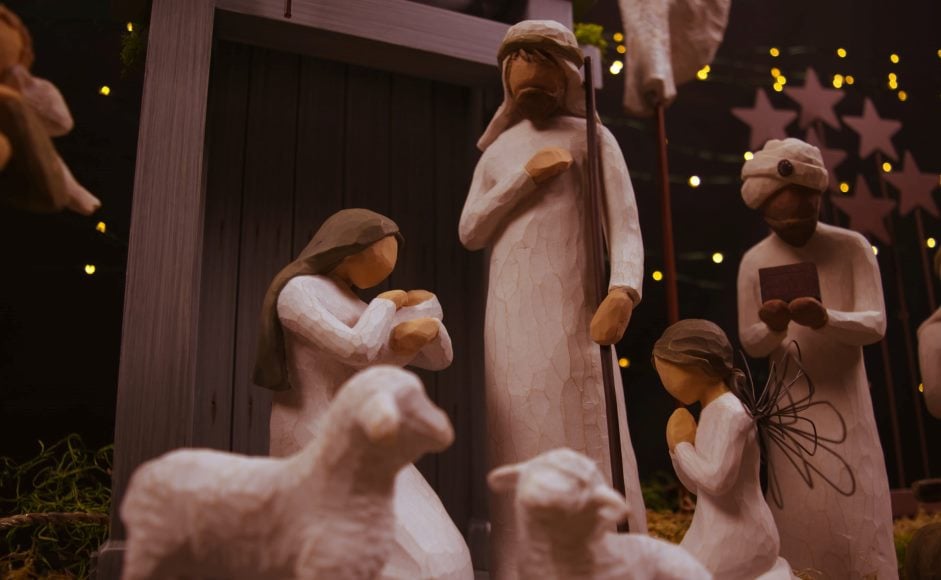 Over the past few days there has been a lot of speculation about whether we will be able to celebrate Christmas this year. Whilst it is highly likely that we will not be able to hold large family gatherings or sing carols in church, Christmas is not cancelled nor has the meaning of Christmas been changed.

Rather in the words of the Very Rev Dr Susan Brown, "This coming Christmas could be seen as an opportunity to give everyone the perfect ‘excuse’ to reassess how we mark the celebrations whether as a faith festival or simply as a ‘holiday’."
Here are her reflections, published on the Church of Scotland website.

"Yesterday’s announcement from Scotland’s National Clinical Director, Professor Jason Leitch, has already given rise to a flurry of wise-crack responses doing the rounds, such as: “the only way to ‘do’ Christmas this year is to kill the Turkey and have 20 round for the funeral.”

Sadly, even that would not necessarily mean people could sit down to eat together since the 20 refers to the number allowed to attend the suitably distanced, mask-wearing service.

Wakes, like every other social gathering in restaurants and hotels, are subject to the current hospitality restrictions.
But you get the point.

Part of what Christmas is about, is getting together with family or with friends to share food and exchange presents.
It is one of the reasons why so many people who live on their own, dread the season.

Without being a part of a larger gathering, those on their own, somehow feel excluded from the ‘real’ Christmas – even although Christmas has its roots in a tiny gathering of just two people and a baby without any of the table-groaning excesses we have come to associate with it.

I am not at all sure how Christmas, especially in Scotland, grew to be associated with bigger numbers, more gifts and enough food to satisfy an army after exercise.

The celebration of Christmas was abolished for us in 1640 and only became a public holiday for Scots in 1958.
That means that until relatively recently, our ‘tradition’ was for Christmas day to be a working day when children might receive a stocking with an orange, an apple, a ‘penny’ and a book. And that is within the living memory of many of our older people.

Now, however, Professor Leitch is telling us that in 2020, Christmas will not be ‘normal’ – that is it will not have all the people trimmings.

And I confess, I love having everyone coming for dinner, I love the midnight service too, on Christmas Eve, when everyone and their auntie weaves their way to church (some able to do so in more of a straight line than others!).

I love having only a few hours’ sleep before getting up to get the turkey in the oven before the Christmas day service when the children are so excited and we have an impromptu nativity where they tell the story.

I love sharing a cuppa and cake with people before everyone goes home to do what they do at Christmas.

For us, it means present opening and then dinner, Usually for around 12-15 of us. Sometimes more, sometimes less.
This year it looks like less. A lot less, it may possibly even be just the two of us.
Isolation

And while for me and for many others that might be disappointing – in some cases deeply disappointing – it may actually transpire that it helps to take just a little of the load off families who find Christmas difficult at the best of times and who would face even greater pressures this year thanks to job losses or the reduction in their income as a result of the current pandemic.

This coming Christmas could be seen as an opportunity to give everyone the perfect ‘excuse’ to reassess how we mark the celebrations whether as a faith festival or simply as a ‘holiday’.

That said, this year has been so psychologically tough for so many that the thought of Christmas too, being restricted, could be for some, the straw that breaks the camel’s back.

People need things to look forward to – especially perhaps those who have been in isolation and who have missed significant events such as the birth of a grandchild or important birthdays, a family wedding, or who have even had to forgo attending the funerals of people they have loved.

To have now, such a major event in their lives, one they have been looking forward to, taken from them, could have devastating consequences on their mental health.

We cannot underestimate that impact.

If we do, it may well be one of the greatest mistakes we ever make.

We need, as a society and as communities, to look out for those around us.

We need to ensure that we take people’s mental health seriously – so seriously that we actively look for ways of reaching out to those who feel so isolated, so abandoned, so swept to one side that they are in danger of losing a sense of their own worth and of the worth of life itself.

Bridge gaps between people and God

Professor Leitch is giving us due warning here.
In his call to prepare for a digital Christmas he is saying we need to find other ways of drawing people together.
In this respect we are better off than our Muslim sisters and brothers who found restrictions suddenly being introduced around one of their major festivals the night before that festival - literally as families had begun gathering and as they were preparing the food.

Those who had arrived from a distance, simply had to turn around and go back to their own homes again.
From a faith perspective, churches the length and breadth of the land are already beginning to think digitally and to shape ideas to help people hear the Christmas story across all sorts of digital platforms and social media – as we have been doing since March.

For us, the Christmas message, even in a time of pandemic, is one that is principally about hope.
The child who was born in a manger, came not so that some could feast.

He came to build bridges and to bridge gaps between people and God and between people and people.
The baby’s birth is a challenge to the whole of humanity to dare to look beyond ourselves to the needs of those around us, in the knowledge that God thought everyone was worth sending his Son for.

This Christmas may not be like Christmases past, but it will still be Christmas. And we can help it to be good in a different way by caring beyond our own. For all."