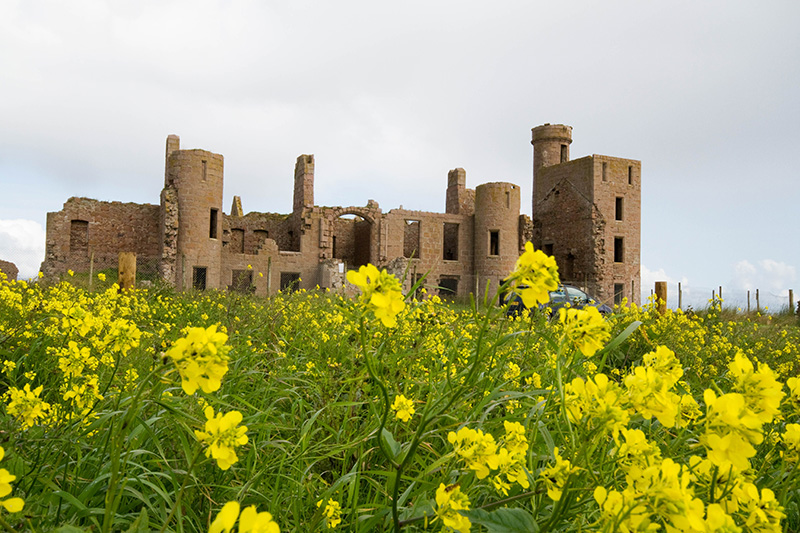 One of the most impressive ruins in the North East of Aberdeenshire are the remains of New Slains Castle. Perched on the edge of a cliff 1 kilometre from Cruden Bay the building was originally a 16th-century tower house, built by the 9th Earl of Erroll. The building was extended on several occasions, with the final reconstruction carried in 1837, when it became a Scots Baronial Mansion, surrounded by three extensive gardens. 1913 the 20th Earl of Erroll sold New Slains, ending more than 300 years of occupation by the family. It was purchased by Sir John Ellerman, who leased it out. In 1925 the roof was removed to avoid taxes. Many key historical personalities are said to have stayed in New Slains Castle including Winston Churchill. The building is also associated with Bram Stoker, who is thought to of used the building as the inspiration behind Castle Dracula.  New Slains Castle, even in its ruined state, is the most significant building in the Parish of Cruden and surrounding area. It is the nearest thing we have to palace!

Jesus in Herod’s Palace
On hearing this, Pilate asked if the man was a Galilean. When he learned that Jesus was under Herod’s jurisdiction, he sent him to Herod, who was also in Jerusalem at that time.
When Herod saw Jesus, he was greatly pleased, because for a long time he had been wanting to see him. From what he had heard about him, he hoped to see him perform a sign of some sort. He plied him with many questions, but Jesus gave him no answer. The chief priests and the teachers of the law were standing there, vehemently accusing him. Then Herod and his soldiers ridiculed and mocked him. Dressing him in an elegant robe, they sent him back to Pilate. That day Herod and Pilate became friends – before this they had been enemies.

Herod is connected to two notable events recorded in the New Testament. First, the beheading of John the Baptist and the trial of Jesus. John was a fierce critic of Herod, especially his second marriage which John declared as being incestuous and contrary to Jewish law. Fearful of rebellion, Herod had John imprisoned and later executed. According to the Gospels of Matthew and Mark, Herod was reluctant to order John's death but was compelled by Herodias' daughter, unto whom he had promised any reward she chose because of her dancing for guests at his birthday banquet. Her request was the for the head of John the Baptist served on a platter! Herod is also associated with the series of events that led to the death of Jesus, most notably the mockery of trial. The scene of Jesus mocking was Herod’s Palace, the second most important building in ancient Jerusalem.  Time and time again Herod questioned Jesus and instructed him to perform a miracle. Throughout the ordeal of humiliation, Jesus remained silent, even when dressed in a purple robe.

The mockery and ridicule of Jesus was foreseen in Isaiah 50:6

I gave my back to those who strike,
and my cheeks to those who pull out the beard;
I hid not my face from disgrace and spitting.
There is no doubt that ridicule and mockery are some of most humiliating and painful experiences any person can go through, especially when done at hands of powerful and heaped upon the powerless.

The God of peace,
who brought again from the dead our Lord Jesus,
that great shepherd of the sheep,
through the blood of the eternal covenant,
make you perfect in every good work to do his will,
working in you that which is well-pleasing in his sight;
and the blessing of God the Father, God the Son and God the Holy Spirit be with you forevermore
Amen