As we journey through these uncertain times, each day Sean will seek to post a thought or reflection, a Bible verse or a prayer.

'Looking at the whole picture'

I took a quick look at the picture.  There was a square tower with a flag flying on the top.  “Looks like an English country church,” I thought.  The place had to begin with the letter “N”.  For the past nine days my Facebook friends have been having a bit of lockdown puzzle fun, posting a picture of a place where they have been, beginning with a different letter of the alphabet. I ignored the picture of Lita on her bike smiling at me from the foreground.  Then I noticed what looked like a floral clock beside the old building at the back.  I peered closely at it, trying to make out the words planted out in flowers.  I could just make out the word “Lat” which I happened to know was Polish for year.  So it wasn’t an English country church!  I stared and stared at the tiny face of the clock to see if I could make out anything else which might give me a clue as to where the picture was taken, and nearly gave up.  It was then that I looked at the whole picture and saw that the Polish gardeners had helpfully planted out the name of the town in quite big letters, “Nowy Sącz”. There they were in front of the tower! It wasn’t a country church but a Royal Palace in the south of Poland.
I had concentrated so much on the tiny detail that I had overlooked the obvious, failing to look at the whole picture. 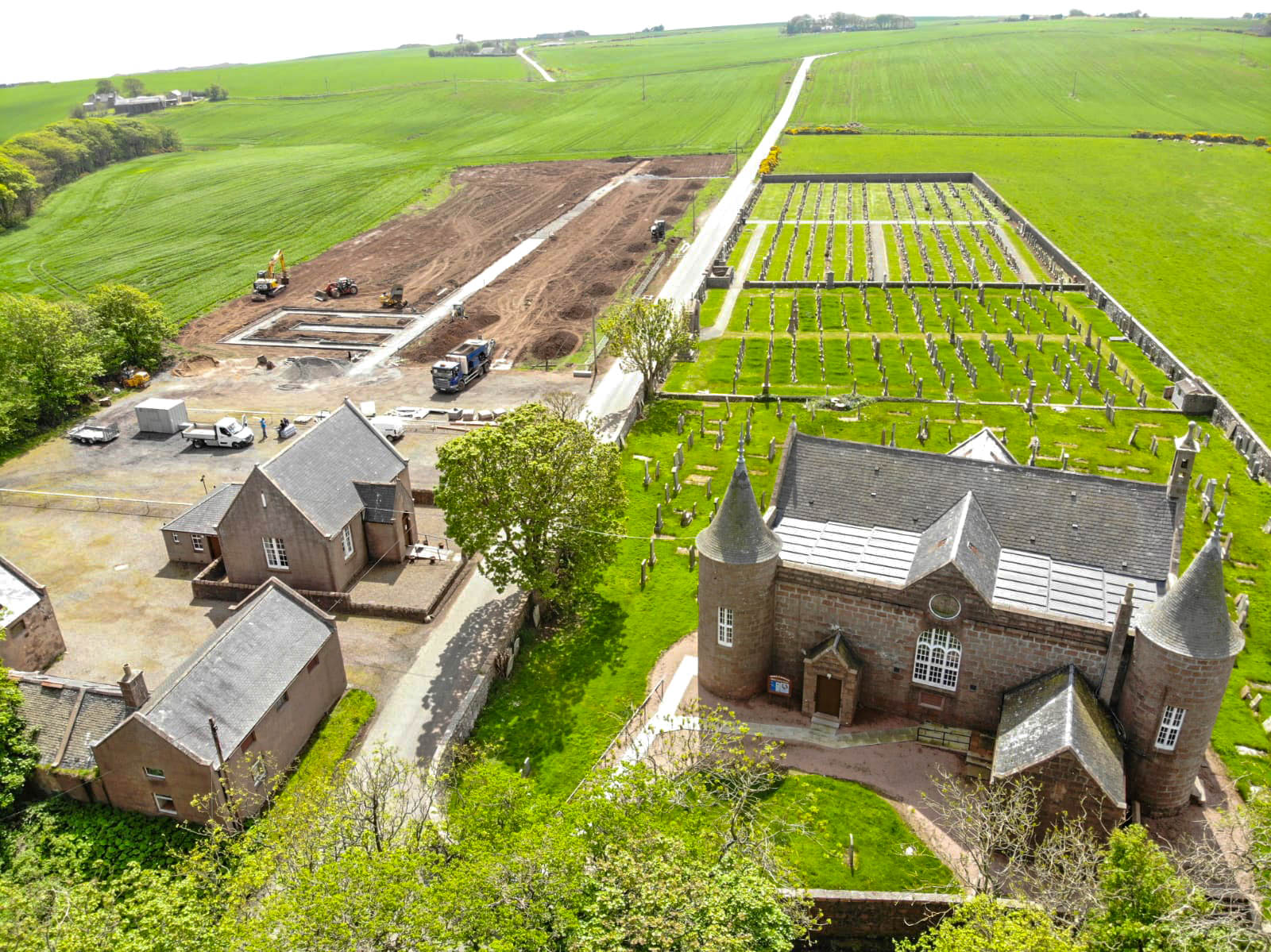 I loved seeing the aerial views of our church taken by George Jamieson from his drone.  You can see the church as we don’t usually see it:  the 1834 extension with its towers, and fancy pointed roof above the new gallery; the vestry/session house; the 1912 extension which houses the organ. You can see how all the bits fit together.  Then looking wider, you can see the stable block, the hall, the straight lines of the grave stones, countryside round about and of course the beginning of the cemetery extension.  Our personal view of the church building is often limited to the front door and the view from the pew where we usually sit.  We seldom see the whole picture.  The architects who oversaw the 1834 extension however did think a bit about it and placed the pulpit where the minister can see (and be seen by) everyone – the whole picture!
Many of us are pondering what the future will hold for us as a congregation, or indeed for the whole church in Scotland once lockdown is finally ended.  We may worry that things will not be the same.  They won’t!  We are in danger, however, of focusing on the little details that worry us.  Instead we should be opening ourselves to God and asking him to help us see a little more clearly what he sees.  To look at the whole picture and try to discern what plans he has for us and for his church. It may be different to what we think!

Samuel anoints David
The Lord said to Samuel, ‘How long will you mourn for Saul, since I have rejected him as king over Israel? Fill your horn with oil and be on your way; I am sending you to Jesse of Bethlehem. I have chosen one of his sons to be king.’
But Samuel said, ‘How can I go? If Saul hears about it, he will kill me.’
The Lord said, ‘Take a heifer with you and say, “I have come to sacrifice to the Lord.” Invite Jesse to the sacrifice, and I will show you what to do. You are to anoint for me the one I indicate.’
Samuel did what the Lord said. When he arrived at Bethlehem, the elders of the town trembled when they met him. They asked, ‘Do you come in peace?’
Samuel replied, ‘Yes, in peace; I have come to sacrifice to the Lord. Consecrate yourselves and come to the sacrifice with me.’ Then he consecrated Jesse and his sons and invited them to the sacrifice.
When they arrived, Samuel saw Eliab and thought, ‘Surely the Lord’s anointed stands here before the Lord.’
But the Lord said to Samuel, ‘Do not consider his appearance or his height, for I have rejected him. The Lord does not look at the things people look at. People look at the outward appearance, but the Lord looks at the heart.’
Then Jesse called Abinadab and made him pass in front of Samuel. But Samuel said, ‘The Lord has not chosen this one either.’ Jesse then made Shammah pass by, but Samuel said, ‘Nor has the Lord chosen this one.’ Jesse made seven of his sons pass before Samuel, but Samuel said to him, ‘The Lord has not chosen these.’ So he asked Jesse, ‘Are these all the sons you have?’
‘There is still the youngest,’ Jesse answered. ‘He is tending the sheep.’
Samuel said, ‘Send for him; we will not sit down until he arrives.’
So he sent for him and had him brought in. He was glowing with health and had a fine appearance and handsome features.
Then the Lord said, ‘Rise and anoint him; this is the one.’
So Samuel took the horn of oil and anointed him in the presence of his brothers, and from that day on the Spirit of the Lord came powerfully upon David. Samuel then went to Ramah.

On the road to Emmaus
Now that same day two of them were going to a village called Emmaus, about seven miles from Jerusalem. They were talking with each other about everything that had happened. As they talked and discussed these things with each other, Jesus himself came up and walked along with them; but they were kept from recognising him.
He asked them, ‘What are you discussing together as you walk along?’
They stood still, their faces downcast. One of them, named Cleopas, asked him, ‘Are you the only one visiting Jerusalem who does not know the things that have happened there in these days?’
‘What things?’ he asked.
‘About Jesus of Nazareth,’ they replied. ‘He was a prophet, powerful in word and deed before God and all the people. The chief priests and our rulers handed him over to be sentenced to death, and they crucified him; but we had hoped that he was the one who was going to redeem Israel. And what is more, it is the third day since all this took place. In addition, some of our women amazed us. They went to the tomb early this morning but didn’t find his body. They came and told us that they had seen a vision of angels, who said he was alive. Then some of our companions went to the tomb and found it just as the women had said, but they did not see Jesus.’
He said to them, ‘How foolish you are, and how slow to believe all that the prophets have spoken! Did not the Messiah have to suffer these things and then enter his glory?’ And beginning with Moses and all the Prophets, he explained to them what was said in all the Scriptures concerning himself.
As they approached the village to which they were going, Jesus continued on as if he were going further. But they urged him strongly, ‘Stay with us, for it is nearly evening; the day is almost over.’ So he went in to stay with them.
When he was at the table with them, he took bread, gave thanks, broke it and began to give it to them. Then their eyes were opened and they recognised him, and he disappeared from their sight. They asked each other, ‘Were not our hearts burning within us while he talked with us on the road and opened the Scriptures to us?’
They got up and returned at once to Jerusalem. There they found the Eleven and those with them, assembled together and saying, ‘It is true! The Lord has risen and has appeared to Simon.’ Then the two told what had happened on the way, and how Jesus was recognised by them when he broke the bread.

Think about what God said to Samuel when he was tasked with anointing a new King for Israel:  The Lord does not look at the things people look at. People look at the outward appearance, but the Lord looks at the heart.
Think about how the mysterious travelling companion showed Cleopas and his friend the whole picture as they travelled together on the road to Emmaus.
Reflect on the issues raised by the demonstrations to stress that “Black lives matter”.  Ask God to help you see his picture for the world.
Ask God to help you see where you and our church fit into his bigger picture and listen to make sure we do not mistake his advice.

Loving and all-seeing God,
As I turn to you in prayer,
I am confident that you are with me
as with all people of the past, present and future.
I stand before you in hope, looking for your guidance,
trusting in your care and protection.
May your faithful love support me and soothe the worries that plague me.

Generous God,
fill us all with compassion and concern for others, young and old,
and help me to look after those in need here in these challenging days.
Bring healing to those who have become ill with Covid-19 and be with those close to them.
Comfort the family and friends of those who have died.
Strengthen and protect all medical professionals caring for those who are ill
and all who work in hospitals, care homes and the community.
Give wisdom to leaders in healthcare and government
that they may make the right decisions for the well-being of us all.
Bless them and keep them safe.

Forgiving God
We know that our world is far from the vision you have for your creation.
Some of us have been born white, in a world where whiteness confers privilege.
Others of us have been born black, in a world where darker skin carries disadvantage.
We know that this is not the world as you would have it be,
but it is our world, and it has been our experience.
None of us asked for our skin colour,
none of us asked to be born the heirs of oppression,
none of us asked to inherit power or powerlessness.
So before you, and in the name of Jesus Christ
who loves all people equally,
regardless of ethnicity, gender or social status,
we come now to recommit ourselves to your vision of the world.
Help us to see your bigger picture.

Our Father in heaven,
hallowed be your name,
your kingdom come,
you will be done,
on earth as in heaven.
Give us today our daily bread.
Forgive us our sins
as we forgive those who sin against us.
Save us from the time of trial
and deliver us from evil.
For the kingdom, the power
and the glory are yours
now and forever.
Amen

May God,
who comes to us
in the things of this world,
bless our eyes
and be in our seeing.

May Christ,
who looks upon us
with deepest love,
bless our eyes
and widen our gaze.

May the Spirit,
who perceives what is
and what may yet be,
bless our eyes
and sharpen our vision.
Amen