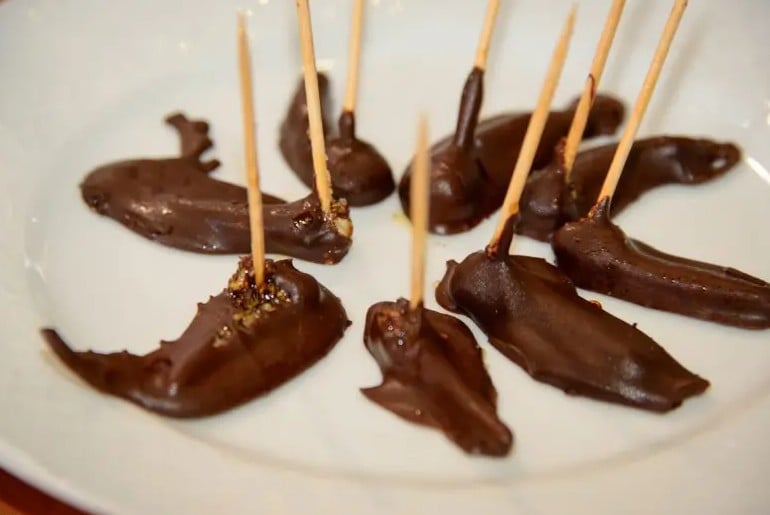 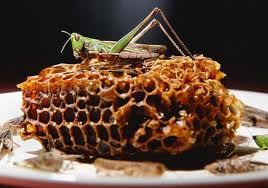 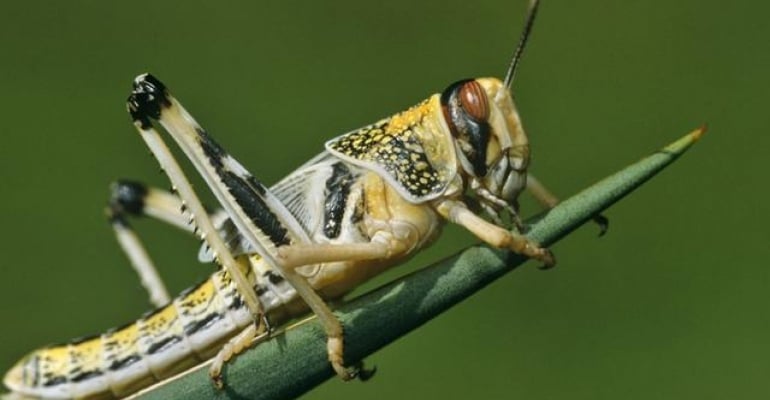 In some parts of the word locusts are eaten as either a tasty snack or delicacy for a special occasion. For example, in 1984 parts of Australia were devastated by swarms of locusts. The locals retaliated by eating them. A book was published called Eating with Sky Prawns (an alternative name for the invaders) which contained 20 recipes including locust dumplings and locust popcorn. Meanwhile in Mexico there is a delicacy known as Locusts in Chocolate and in parts of Africa, Locusts are consumed deep fried and served with Tartare Sauce!

Matthew 3:1-6
John the Baptist Prepares the Way
In those days John the Baptist came, preaching in the wilderness of Judea and saying, “Repent, for the kingdom of heaven has come near.” This is he who was spoken of through the prophet Isaiah:
“A voice of one calling in the wilderness,
‘Prepare the way for the Lord,
make straight paths for him.’”
John’s clothes were made of camel’s hair, and he had a leather belt around his waist. His food was locusts and wild honey. People went out to him from Jerusalem and all Judea and the whole region of the Jordan. Confessing their sins, they were baptized by him in the Jordan River.

One of the strangest characters of the New Testament is John the Baptist. Where he lived, how he dressed, his message and diet were all unconventional. With the Christian theology John is often referred to as the forerunner – one who was to prepare the way for the coming of the Messiah. He also stands in the tradition of the great prophets of the Old Testament. But John ‘s most unique feature was his diet – locusts and wild honey.

Within the Bible Locusts are usually viewed as agents of destruction and signs of God’s judgement. In the story of Exodus, the eight of the ten plagues that descended on ancient Egypt was a plague of locusts. In the highly symbolic Book of Revelation, when the angel sounds the fifth trumpet a plague of demons that appear in the guise of demons is poured out upon the earth. For the people of Jesus’ day locusts were a viewed terrifying metaphor of curse and judgement.

So here is the thought for today - why is John described as eating locusts? Why is this terrifying metaphor of judgement associated with the one who is preparing the way of the messiah? Also, remember that every word is the Gospels is carefully chosen and there for a purpose. Could it be that even in his unconventional choice of diet, where the consumers become consumables that we are given a glimpse in the future work of Jesus -where every curse and threat of judgment can be transformed into a blessing? That the things that make us sad and struggle can be transformed in things that bring joy and renewal and personal growth.

How has this pandemic changed you?

May God the Father,
who does not despise the broken spirit,
give to you a contrite heart.
Amen.
May Christ,
who bore our sins in his body on the tree,
heal you by his wounds.
Amen.
May the Holy Spirit,
who leads us into all truth,
speak to you words of pardon and peace.
Amen.
And the blessing of God almighty,
the Father, the Son, and the Holy Spirit,
be among you and remain with you always.
Amen.