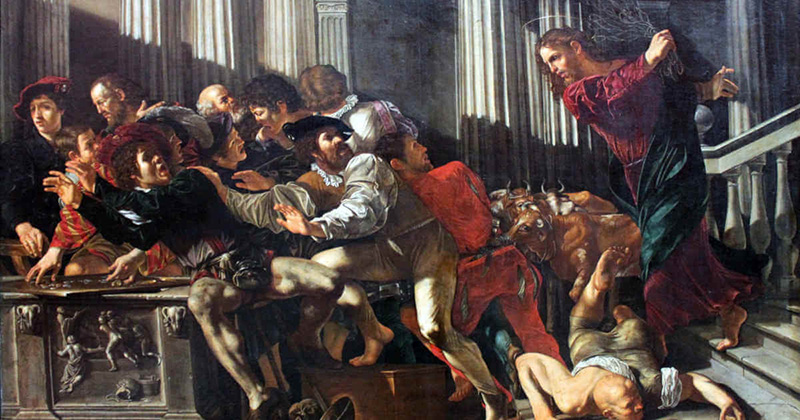 Picture: Christ driving the money-changers from the Temple by Cecco del Caravaggio

What are the things that make you angry? What are the things that stir you soul and make you feel outraged? I think we could all with a minimum effort draw up an exceptionally long list! But there is danger here. Irrespective of how justified we feel, anger can be a perilous and corrosive emotion – it can lead to an irreversible break down in a relationship and at very worst lead to violence.

When it was almost time for the Jewish Passover, Jesus went up to Jerusalem. In the temple courts he found people selling cattle, sheep and doves, and others sitting at tables exchanging money. So he made a whip out of cords, and drove all from the temple courts, both sheep and cattle; he scattered the coins of the money-changers and overturned their tables. To those who sold doves he said, ‘Get these out of here! Stop turning my Father’s house into a market!’ His disciples remembered that it is written: ‘Zeal for your house will consume me.

The Jews then responded to him, ‘What sign can you show us to prove your authority to do all this?’
Jesus answered them, ‘Destroy this temple, and I will raise it again in three days.’
They replied, ‘It has taken forty-six years to build this temple, and you are going to raise it in three days?’ But the temple he had spoken of was his body. After he was raised from the dead, his disciples recalled what he had said. Then they believed the Scripture and the words that Jesus had spoken.
Now while he was in Jerusalem at the Passover Festival, many people saw the signs he was performing and believed in his name. But Jesus would not entrust himself to them, for he knew all people. He did not need any testimony about mankind, for he knew what was in each person.

The account of Jesus cleansing the temple makes interesting reading. The passage is clearly not a parable but a record of an actual event. The picture presented is not the ghastly misrepresentation we find in the sweet sentiment of some old children’s hymns, such as gentle Jesus meek and mild. Rather, here we glimpse the real ‘man’ – anger and fury under strict control, measured and used to good purpose. Also note, nobody is hurt. The overthrowing of the tables, dumping money boxes on the ground, is motivated not by ego or bruised pride. Rather it is Jesus infuriated at the buying and selling within the temple courts making the scared profane.

The context of the passage is also worthy of mention. To purchase an animal for sacrifice or give money as an offering had to be done in a special temple coinage. I suspect some of Jesus ire was at the money changes making a handsome profit. And the buisness was conducted in outer precincts of the temple – known as the Court of the Gentiles. It was only part of the temple a gentile could attend. So here they were trying to pray and worship during the selling and bartering, not to mention the noise and smell of animals!

This prayer by Thandiwe Dale-Ferguson,  was written in response to the cover-up of sexual abuse revealed within the Roman Catholic Church in Pennsylvania USA.

May God the Father,
who does not despise the broken spirit,
give to you a contrite heart.
Amen.
May Christ,
who bore our sins in his body on the tree,
heal you by his wounds.
Amen.
May the Holy Spirit,
who leads us into all truth,
speak to you words of pardon and peace.
Amen.
And the blessing of God almighty,
the Father, the Son, and the Holy Spirit,
be among you and remain with you always.
Amen.