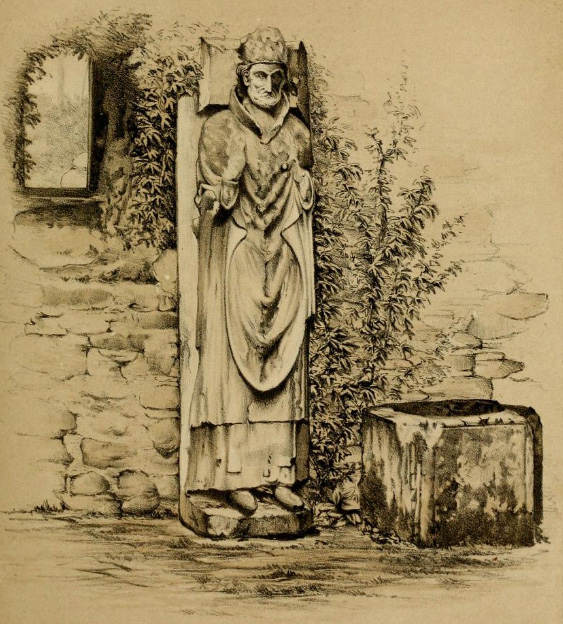 “Saint Who?” you may be asking, but had you been marching with  Robert the Bruce in the 14th Century you would have known him well.  Indeed some say that Kessog was the Patron Saint of Scotland before Saint Andrew was adopted later.  Scottish soldiers in the Wars of Independence shouted the saint’s name as a battle cry, and relics of Kessog were said to have been carried by the Scots at Bannockburn.  In 1316 the Bruce took refuge at Luss near the Saint’s burial place after his defeat at the Battle of Methven and was cared for there by the local laird. As King he would later grant a charter to John of Luss “for the reverence and honour of our patron, the most holy man, the blessed Kessog”.  So Kessog was a big player in the 14th century!

Kessog was born about the year 460 into the royal family of Cashel in Munster in Ireland, one of the sons of Óengus mac Nad Froích, the first Christian King in these parts.  There is a story told about Kessog as a boy. The sons of some princes who were visiting the king were drowned in a swimming accident.  Kessog was the sole survivor.  The boy took to his knees and prayed all night, and in the morning the drowned children were restored to life, thereby averting likely wars with the various princes.

It is said that St Patrick had baptised Kessog’s father and now he took prince Kessog into his care, eventually sending him to study with St Malachoi at the monastery of Nendrum in County Down.  Kessog was ordained and Patrick sent him to the land of the Scots, the Irish people who had made their home in what is now Argyll, creating a kingdom which was known as Dalriada.  He settled on the shores of Loch Lomond at Luss and built his church on an Island there called Inchtavannach.
This was dangerous borderlands between the Scots of Dalriada to the west, the Britons of Strathclyde to the south and the warlike Picts to the north.   Undaunted, Kessog preached among these people and founded churches in the area now known as Lennox, with churches which still bear his name in Comrie, Callander and Auchterarder to mention but a few.  It is even said that he made the dangerous journey north to where Inverness now stands and met with the Pictish King Brude.  His visit there is remembered in the name of the settlements where once there was a ferry across the Firth, and now the Kessock Bridge.

Kessog met a martyr’s end on 10 March 520 when he was murdered on the shores of Loch Lomond, perhaps by those who resented the new religion he was preaching.  He was buried near his church.  A great cairn once marked the spot where he was killed, but the stones were removed in the troubled Jacobite days to build a new military road up the loch-side.  But there among the stones was found a statue which had been hidden for centuries.  It is believed to be the Saint’s image and it now stands in Luss Church.

Kessog looked to his teachers Patrick and Malachoi as his inspiration and encouragement when he found himself in the dangerous land that we know as Scotland.  Everything there was strange, dangerous and frightening.  But he knew that God was with him in this new land.  Centuries later, Bruce and his followers looked to Kessog for their encouragement in their troubled times.

We are trying to see beyond the pandemic, wondering what the church will be like.  Once thing is certain, it will be different and the challenges perhaps as great as Kessog faced in his new land.
Who do you look to for inspiration and encouragement as we all take faltering steps into our unseen future?

‘Be strong and very courageous. Be careful to obey all the law my servant Moses gave you; do not turn from it to the right or to the left, that you may be successful wherever you go. Keep this Book of the Law always on your lips; meditate on it day and night, so that you may be careful to do everything written in it. Then you will be prosperous and successful. Have I not commanded you? Be strong and courageous. Do not be afraid; do not be discouraged, for the Lord your God will be with you wherever you go.’

A Creed for Troubled Times

We believe that our lives are held within the encircling love of God,
who knows our names and recognises our deepest needs.

We believe that Christ is the divine Child of the living God,
and that his grace is like living waters that can never be exhausted.

We believe in the challenging, renewing, enabling Spirit of God
who always looks for our welfare as a mother cares for her child.

We believe that God is in the rough, barren places as well as in green pastures,
and that hard times and disciplines can also be loving gifts.

We believe that our journey has a purpose and a destination,
and that our path leads to a glory we cannot yet imagine.

We believe that in the church we are fellow pilgrims on the road,
and that we are called to love one another as God loves us.

This is our faith and we are humbled to profess it in Jesus the Christ.
Amen

Adapted from a Lent Liturgy, The Order of Saint Columba, Patmos Abbey