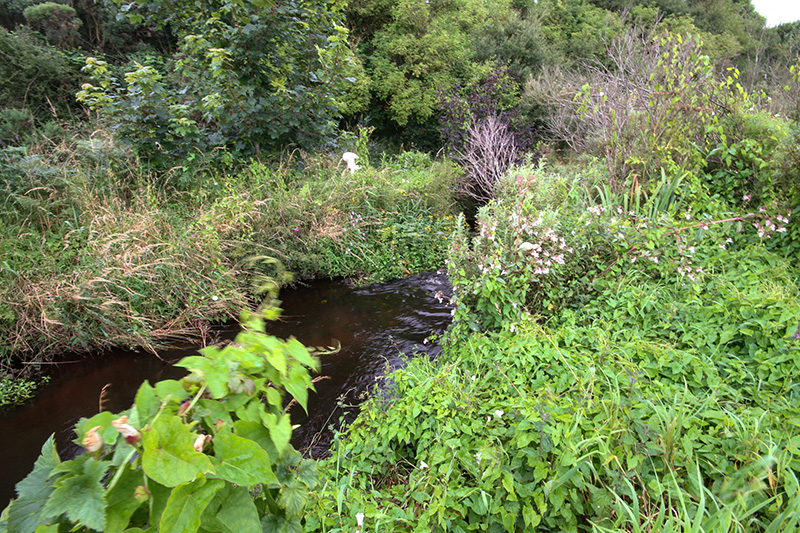 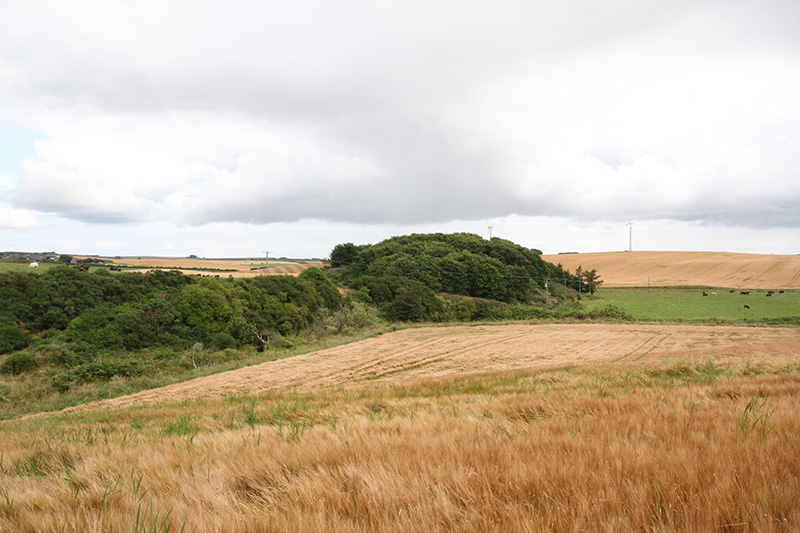 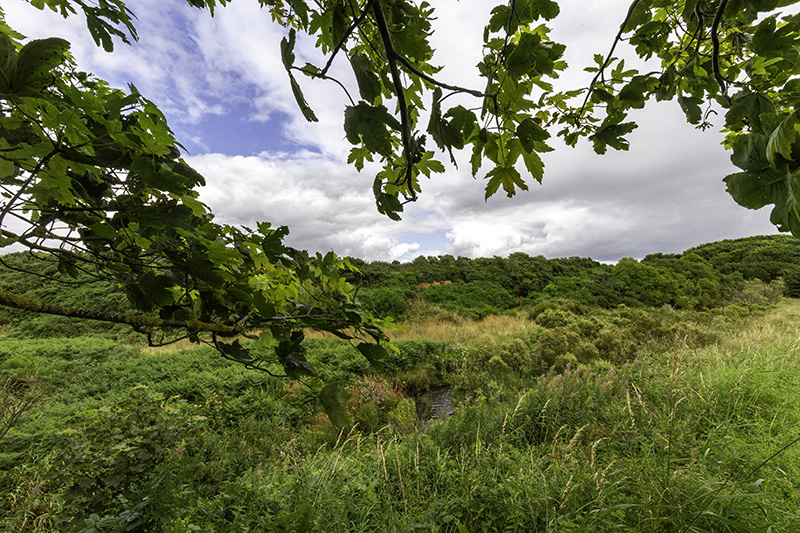 First Witch: When shall we three meet again,
In thunder, lighting or in rain?
Second Witch: When the hurly-burly’s done,
When the battle’s lost and won.
— “Macbeth,” Act 1, Scene (i)

One of the more curious places in and around the Parish of Cruden is the so-called Witches' Pot. Located just outside Hatton, it was a deep pool on the Water of Cruden which according to tradition was used for the drowning of witches. Regretfully I am not aware of any documentation that offers any further information. What is clear, the persecution of witches was widespread in Aberdeen and Aberdeenshire, especially during the sixteenth and seventeenth centuries. This would include the so called ‘witch craze’ of 1596 to 1597. After 1703 witchcraft was no longer considered to be a crime and no further cases were recorded.

In those days it was believed that people could make a personal pact with the devil and have malevolent supernatural powers.  Often witchcraft was deemed responsible were sudden or lingering illness, accidents, unexpected deaths, failure of crops (strange behaviour in animals and disasters at sea.  Most people accused of witchcraft were women. During the so-called witch craze in Aberdeen and the surrounding areas, two men and 45 women were charged. These women were often the poor, elderly women of a community 'whose poverty, sour temper or singular habits made them an object of dislike or fear to their neighbours'. Such a woman might or might not have a reputation for healing, as well as harming, but above all else she was deemed to have malevolent supernatural powers.

One example concerns the case of Isobel Skuddie. She was found guilty of witchcraft and burned in March 1597. One of the charges concerned gathering up bones from Dyce churchyard, boiling them in water and then taking the water and washing William Symmer of Hatton of Fintray. The bones were then thrown into the River Don by Symmer’s mother, which caused the water to rumble in such a manner as [if] all the hills had fallen therein'. Whether Symmer recovered from his illness is not recorded!

Little remains of the Witches Pot. Over the centuries, it has silted up and the Water of Cruden is now a largely shallow burn, except when it is in spate. The banks are also overgrown which makes access difficult. But it is a reminder of the power of fear.

Jesus before Pilate
Meanwhile Jesus stood before the governor, and the governor asked him, ‘Are you the king of the Jews?’
‘You have said so,’ Jesus replied.
When he was accused by the chief priests and the elders, he gave no answer. Then Pilate asked him, ‘Don’t you hear the testimony they are bringing against you?’ But Jesus made no reply, not even to a single charge – to the great amazement of the governor.
Now it was the governor’s custom at the festival to release a prisoner chosen by the crowd. At that time they had a well-known prisoner whose name was Jesus Barabbas. So when the crowd had gathered, Pilate asked them, ‘Which one do you want me to release to you: Jesus Barabbas, or Jesus who is called the Messiah?’ For he knew it was out of self-interest that they had handed Jesus over to him.
While Pilate was sitting on the judge’s seat, his wife sent him this message: ‘Don’t have anything to do with that innocent man, for I have suffered a great deal today in a dream because of him.’
But the chief priests and the elders persuaded the crowd to ask for Barabbas and to have Jesus executed.
‘Which of the two do you want me to release to you?’ asked the governor.
‘Barabbas,’ they answered.
‘What shall I do, then, with Jesus who is called the Messiah?’ Pilate asked.
They all answered, ‘Crucify him!’
‘Why? What crime has he committed?’ asked Pilate.
But they shouted all the louder, ‘Crucify him!’
When Pilate saw that he was getting nowhere, but that instead an uproar was starting, he took water and washed his hands in front of the crowd. ‘I am innocent of this man’s blood,’ he said. ‘It is your responsibility!’
All the people answered, ‘His blood is on us and on our children!’
Then he released Barabbas to them. But he had Jesus flogged, and handed him over to be crucified.

There is no fear in love. But perfect love drives out fear, because fear has to do with punishment. The one who fears is not made perfect in love.

I personally have a negative view on the occult. In the words of Count Dracula (aka Christopher Lee) ‘I warn all of you: never, never, never. You will not only lose your mind: you lose your soul.’ However,  this reflection is not about the occult, but about the power fear which can so easily manipulated  into paranoia. This I think explains much of the persecution of so-called witches, who were more likely to be healers. Thank goodness for the enlightenment!

The power of fear also plays a large part in the trial of Jesus before Pontius Pilate. There was the fear of rebellion and the stirring of an uprising against the power of Rome. This eventually happened in AD 70, when the people rebelled and took up arms against Rome. Of course, despite all the rhetoric and enthusiasm, they did not stand a change against one of the great military empires in history. The consequences were terrible. Wholesale slaughter and the survivors carted off into slavery. So great was the number of ‘new’ slaves, it caused a decline in the cost of purchasing slaves right across the Roman empire. There was the fear of a loss of position and authority from the religious leaders. Jesus had been in open conflict with many of the pharisees, so now was the chance of revenge. And there was the fear of the crowd. Fearful of the Roman Authorities and Religious Leaders, meant they were fertile ground to be stirred up and their fear turned into hatred and paranoia.

This raises a possible and curious contrast between the crowds shouting for the drowning of a witch and screaming for Jesus to be crucified.

Fear and anxiety are powerful emotions. They can protect us from harm. For example, a fear of heights will keep you from falling off the cliffs near Slains Castle! But fear can disable us. For example, a fear of rejection can prevent acceptance and intimacy. A fear of failure can prevent much need personal growth and letting go of past hurts and baggage.
Renouncing Fear: A Prayer
“Say to those who have an anxious heart,
‘Be strong; fear not!’” Isaiah 35:4
Phantasm of fear, I renounce you!
I refuse to call you “spirit” for you are not of God.
You work to oppose the creative forces of the Lord in life and resurrection.
Your efforts will not last.
And you know this.
Delusion of fear, I renounce you!
You may talk loudly, boastfully.
You may bring your buddies, death and destruction, as backup to your threats.
You know your days are numbered.
There is no fear in the life to come.
Specter of fear, I renounce you!
Your work of dividing, fomenting, pain-causing…
We will overcome. With God on our side,
You cannot stand.
Perfect Love, the kind that comes from Christ, casts out fear.
Revenant of fear, I renounce you!
Shrivel and die, you impotent thing!
You may plant, but you will not reap.
You may build, but you will not inhabit.
You may fish, but you will not catch.
There is no home for you, no toe hold, no place of belonging.
You are banished to wither and die… fertilizing the soil of hope and joy.
So be it.
In the name of Christ, so say we all.

I am the Good Shepherd. Fear not for I am with you. Do not be dismayed for I am your Lord. I will strengthen you. Yes, I will help you. I will hold you up with my right hand.
Yes, though I walk through the valley of the shadow of death, I will fear no evil, for You are with me. Your rod for protection and your staff for guidance, they comfort me.
I am your Shepherd. When you pass through the waters, I will be with you; and through the rivers, you shall not drowned. When you walk through fire, you shall not be burned.
Though I walk in the midst of trouble, you will revive me. Lord You stretch out Your hand against the wickedness of my enemies, and your right hand saves me.
You are the sheep of my pasture, I have created you, formed you. Do not fear for I have redeemed you. I have called you by your name. You are mine.
Though many should encamp against me, my heart shall not fear. Though war should rise against me, in this will I be confident. You, Lord, are the Shepherd of my soul. You are my light and my salvation., You are the strength of my life. How great is Your goodness toward those who trust in You!
I am the Good Shepherd and I say to you “Fear not little flock, for it is your Father’s good pleasure to give you the kingdom. He has determined to give you the Kingdom.”
Surely goodness and mercy shall follow me all the days of my life and I will dwell in the house of the Lord forever.
Amen

The LORD bless you and keep you;
the LORD make his face shine upon you
and be gracious to you;
the LORD turn his face toward you
and give you peace.
Amen.