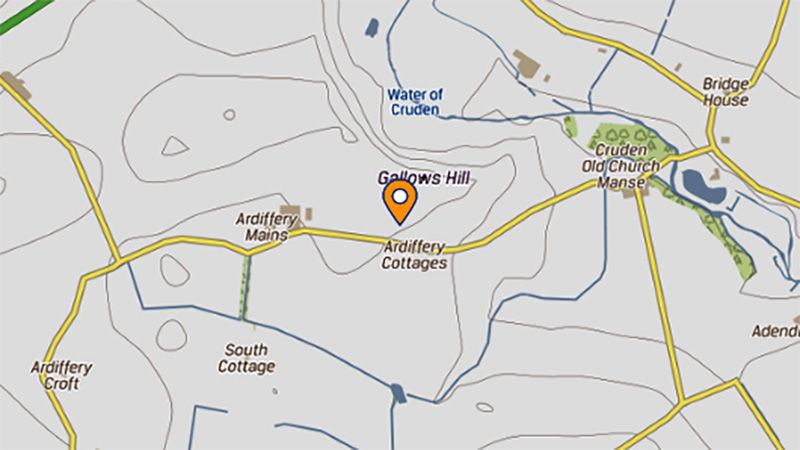 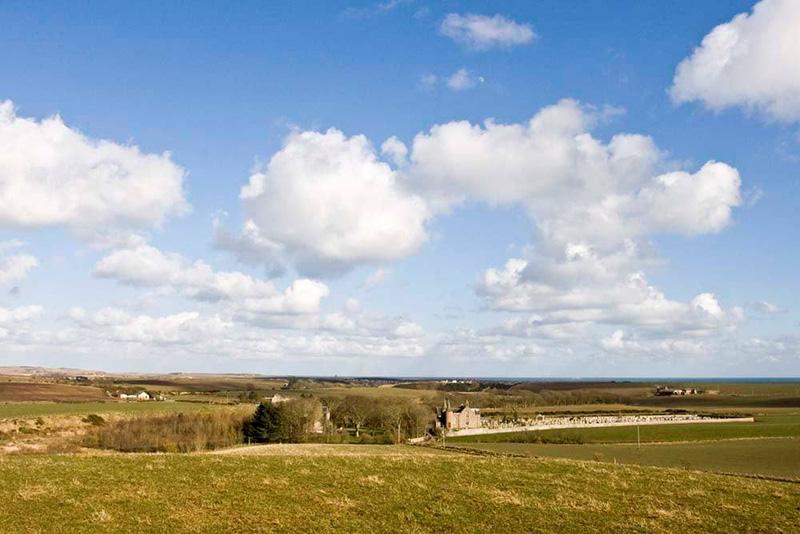 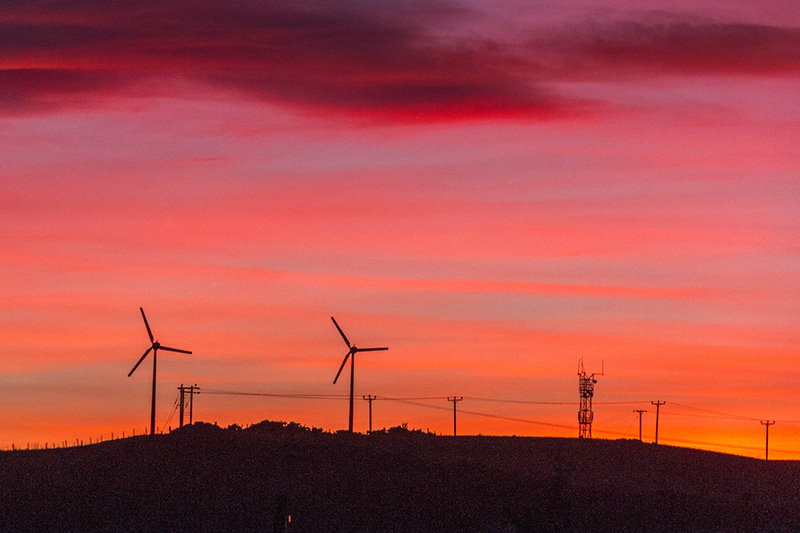 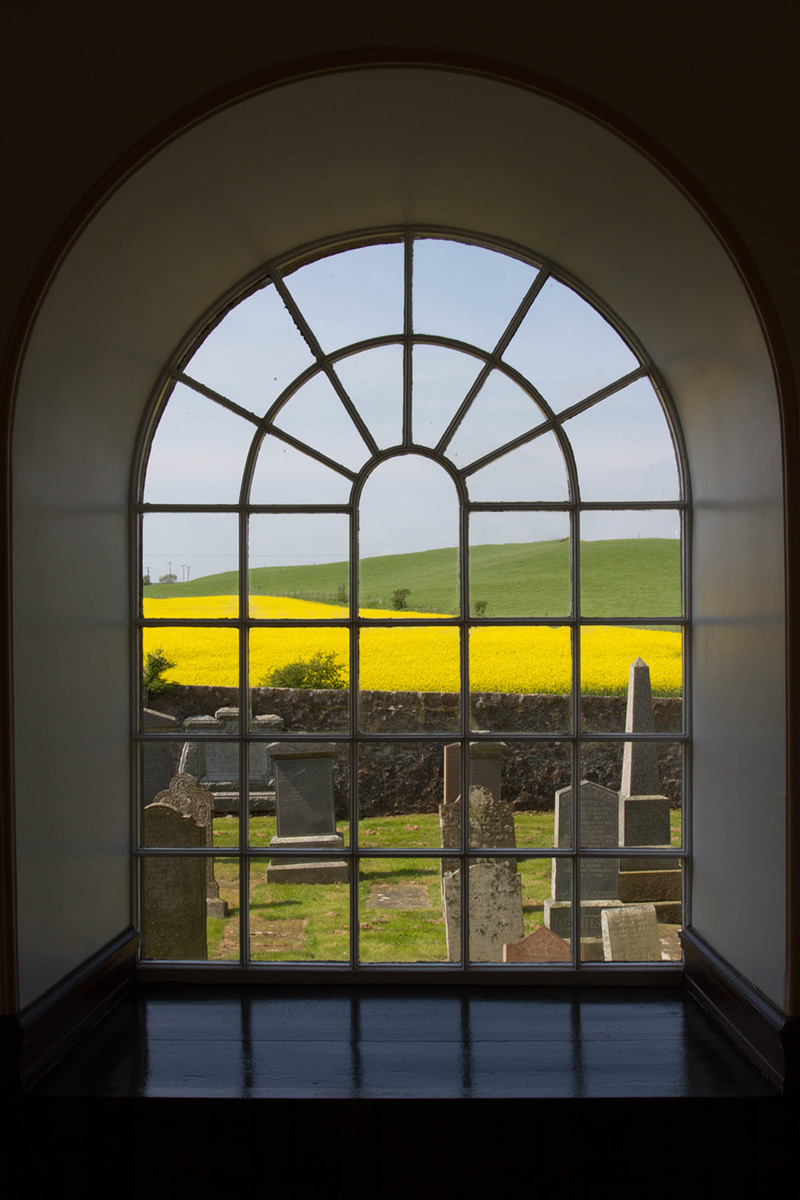 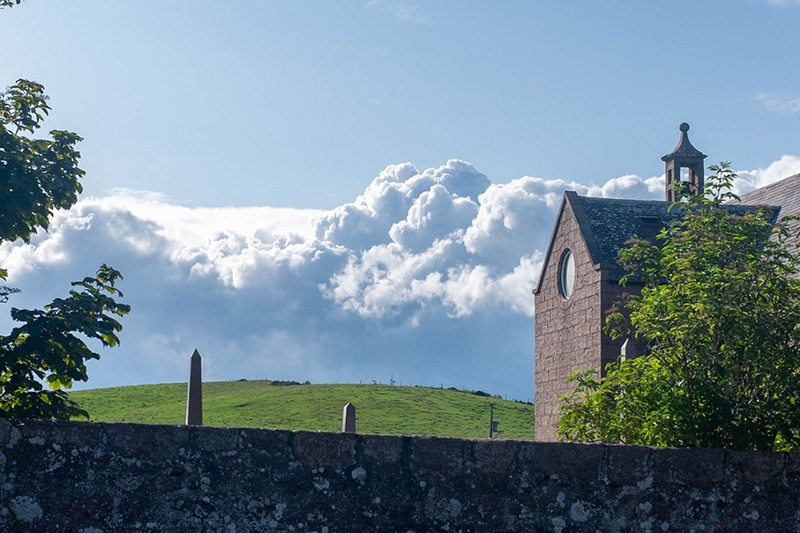 If you are travelling along from Cruden Old Church on the back road to Hatton, just before you reach Mains of Ardiffery, on the right-hand side stands Gallows Hill and Hangman’s Brae. The modest hill gives fine views over the Kirk and surrounding countryside. Now it is cultivated farmland and a very peaceful place. But in times past, as the name suggests, it was a place of execution where brutal justice would have been swiftly administered. The limited information I have been able to glean is that skeletons have been discovered one the site, which I assume are the remains of the unfortunate victims.

The Crucifixion of Jesus
As the soldiers led him away, they seized Simon from Cyrene, who was on his way in from the country, and put the cross on him and made him carry it behind Jesus. A large number of people followed him, including women who mourned and wailed for him. Jesus turned and said to them, “Daughters of Jerusalem, do not weep for me; weep for yourselves and for your children. For the time will come when you will say, ‘Blessed are the childless women, the wombs that never bore and the breasts that never nursed!’ Then
“‘they will say to the mountains, “Fall on us!”
and to the hills, “Cover us!”’
For if people do these things when the tree is green, what will happen when it is dry?”
Two other men, both criminals, were also led out with him to be executed. When they came to the place called the Skull, they crucified him there, along with the criminals—one on his right, the other on his left. Jesus said, “Father, forgive them, for they do not know what they are doing.” And they divided up his clothes by casting lots.
The people stood watching, and the rulers even sneered at him. They said, “He saved others; let him save himself if he is God’s Messiah, the Chosen One.”
The soldiers also came up and mocked him. They offered him wine vinegar and said, “If you are the king of the Jews, save yourself.”
There was a written notice above him, which read: THIS IS THE KING OF THE JEWS.
One of the criminals who hung there hurled insults at him: “Aren’t you the Messiah? Save yourself and us!”
But the other criminal rebuked him. “Don’t you fear God,” he said, “since you are under the same sentence? We are punished justly, for we are getting what our deeds deserve. But this man has done nothing wrong.”
Then he said, “Jesus, remember me when you come into your kingdom.”
Jesus answered him, “Truly I tell you, today you will be with me in paradise.”

The Death of Jesus
It was now about noon, and darkness came over the whole land until three in the afternoon, for the sun stopped shining. And the curtain of the temple was torn in two. Jesus called out with a loud voice, “Father, into your hands I commit my spirit.” When he had said this, he breathed his last.
The centurion, seeing what had happened, praised God, and said, “Surely this was a righteous man.” When all the people who had gathered to witness this sight saw what took place, they beat their breasts and went away. But all those who knew him, including the women who had followed him from Galilee, stood at a distance, watching these things.

The Roman Empire was arguably one of the most powerful and blood thirsty regimes in ancient history. Where else was the mass murder of people and animals done for sport and mere entertainment? The Romans were also the experts at sadistic forms of execution One of their methods of execution involved the convicted being ripped apart by wild animals, a sentenced referred to as “Damnatio ad Bestias.” The best known from of execution was crucifixion. The aim was not only to cause the death of the unfortunate victim, but to ensure the maximum amount of pain and humiliation. So awful was crucifixion, it served as a tactile warning to stay in line. That disobedience and rebellion would have terrible consequences.
Within the Christian faith, the death of Jesus by crucifixion is viewed as an act of atonement. Jesus the Son of God freely gave up his life to serve as a sacrifice for the sins of humanity. His life was a perfect life – free from sin. Thus, his punishment was unmerited and undeserved. In other words, on the cross there was an act of cosmic significance. Jesus became the sacrifice. Jesus suffered. Jesus writhed in pain. Jesus encountered death and entered the portal of hell. (More about that tomorrow.) Of this we need to be clear. Jesus paid the price for all our sins.

At the end of time, billions of people were seated on a great plain before God's throne. Most shrank back from the brilliant light before them. But some groups near the front talked heatedly, not cringing with cringing shame - but with belligerence.

"Can God judge us? How can He know about suffering?", snapped a pert young brunette. She ripped open a sleeve to reveal a tattooed number from a Nazi concentration camp. "We endured terror ... beatings ... torture ... death!"

In another group a Negro boy lowered his collar. "What about this?" he demanded, showing an ugly rope burn. "Lynched, for no crime but being black !"

In another crowd there was a pregnant schoolgirl with sullen eyes: "Why should I suffer?" she murmured. "It wasn't my fault." Far out across the plain were hundreds of such groups. Each had a complaint against God for the evil and suffering He had permitted in His world.

How lucky God was to live in Heaven, where all was sweetness and light. Where there was no weeping or fear, no hunger or hatred. What did God know of all that man had been forced to endure in this world? For God leads a pretty sheltered life, they said.

So each of these groups sent forth their leader, chosen because he had suffered the most. A Jew, a negro, a person from Hiroshima, a horribly deformed arthritic, a thalidomide child. In the centre of the vast plain, they consulted with each other. At last they were ready to present their case. It was rather clever.

Before God could be qualified to be their judge, He must endure what they had endured. Their decision was that God should be sentenced to live on earth as a man.

Let him be born a Jew. Let the legitimacy of his birth be doubted. Give him a work so difficult that even his family will think him out of his mind.

Let him be betrayed by his closest friends. Let him face false charges, be tried by a prejudiced jury and convicted by a cowardly judge. Let him be tortured.

At the last, let him see what it means to be terribly alone. Then let him die so there can be no doubt he died. Let there be a great host of witnesses to verify it.

As each leader announced his portion of the sentence, loud murmurs of approval went up from the throng of people assembled. When the last had finished pronouncing sentence, there was a long silence. No one uttered a word. No one moved.

For suddenly, all knew that God had already served His sentence.

Bless you Jesus Christ,
Father’s eternal Son,
One anointed in the Holy Spirit,
Creator and Sustained and Redeemer of all things.

In unspeakable humility you crossed all worlds to become one with us,
and submitted yourself this day to be judged and beaten,
mocked and despised,
cursed and crucified by the human race,
embracing the hostility of sinners against you,
that you could reach us at our unspeakable worst,
thereby bringing all that you are with your Father in the Holy Spirit
together with all that we are in our terrible darkness and pain.

We betrayed and rejected you
and you formed them into the way of our adoption.

We despised and cursed you
and you formed them into the temple of the Holy Spirit.

all honour and praise and glory to your unspeakable love.
Amen.

God thank you for being with us in this wondering moment
where we stand poised between life and death,
filled to the brim with sorrow,
filled with thoughts of what has been
and what lies before us.
Thank you for the gift of life.
Thank you for our friend Jesus
who was a gift to the world,
a gift in each of our lives.
Comfort us even as we are shaken by the horror of these last hours.
Be our friend in this time of sorrow,
and sustain us in the days to come.

Now Jesus, may God bless you and keep you,
May the very face of God shine upon you, and be gracious to you,
May God’s presence embrace you and give you eternal peace.
Amen.